Both Sage 100 and Acumatica are well-known names in the ERP game, both focusing mainly on small to mid-sized businesses (SMB).

Sage 100 originated in the 1980’s, and is one of the oldest names in the game, while Acumatica came on the scene in 2008. While being established earlier can, in many businesses, be a benefit, discerning customers will come to find that in the ERP world, it can be a negative. 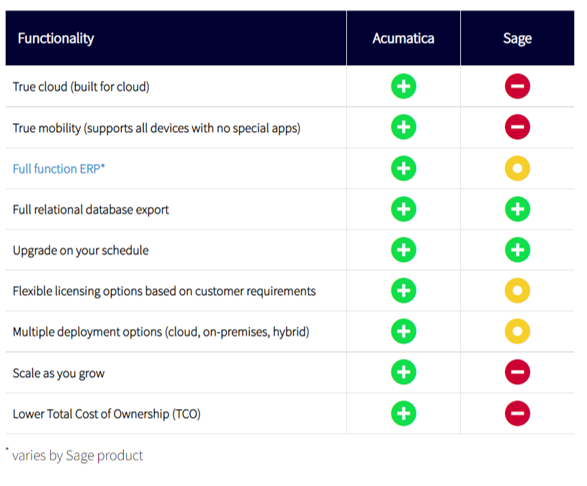 One of, if not the biggest differences is the nature of their deployments.

Acumatica is a true cloud solution, accessible from any internet-connected device, with no special software requirements. There is no on-site equipment or upkeep to consider, and all your data remains secure in the cloud in the event of a natural disaster.

Sage 100 was built for on-premises deployment, and was only modified to work in the cloud after the fact. This difference also extends to how each system charges its users- Acumatica charges by total resources used, not per user, allowing for more flexibility and growth, while Sage 100 charges per user.

Are You a Sage 100 Customer in the Age of True Cloud ERP?

Both ERP solutions offer “industry-specific functionality”, but a closer look shows a clear difference in the amount and quality of those functions, all tipping toward Acumatica.

Acumatica also boasts top-of-class customer satisfaction, driven primarily by its never-ending push into the future. Acumatica rolls out major upgrades and improvements twice a year, meaning their customers are always on the cutting edge of ERP technology. By operating in a customer-first mindset, Acumatica continues to expand its reputation as the ERP platform to turn to for SMB of all sorts.

Compare Acumatica to Other ERP Platforms

Your ability to Achieve More with ERP is based the vision your ERP Partner can provide to YOU.

Our 360⁰ understanding of the Acumatica platform and framework, our decades of industry experience, and our ability to understand and adapt to our clients’ business environments combine to give NexVue a unique ability to craft solutions built on a vision for YOUR success.